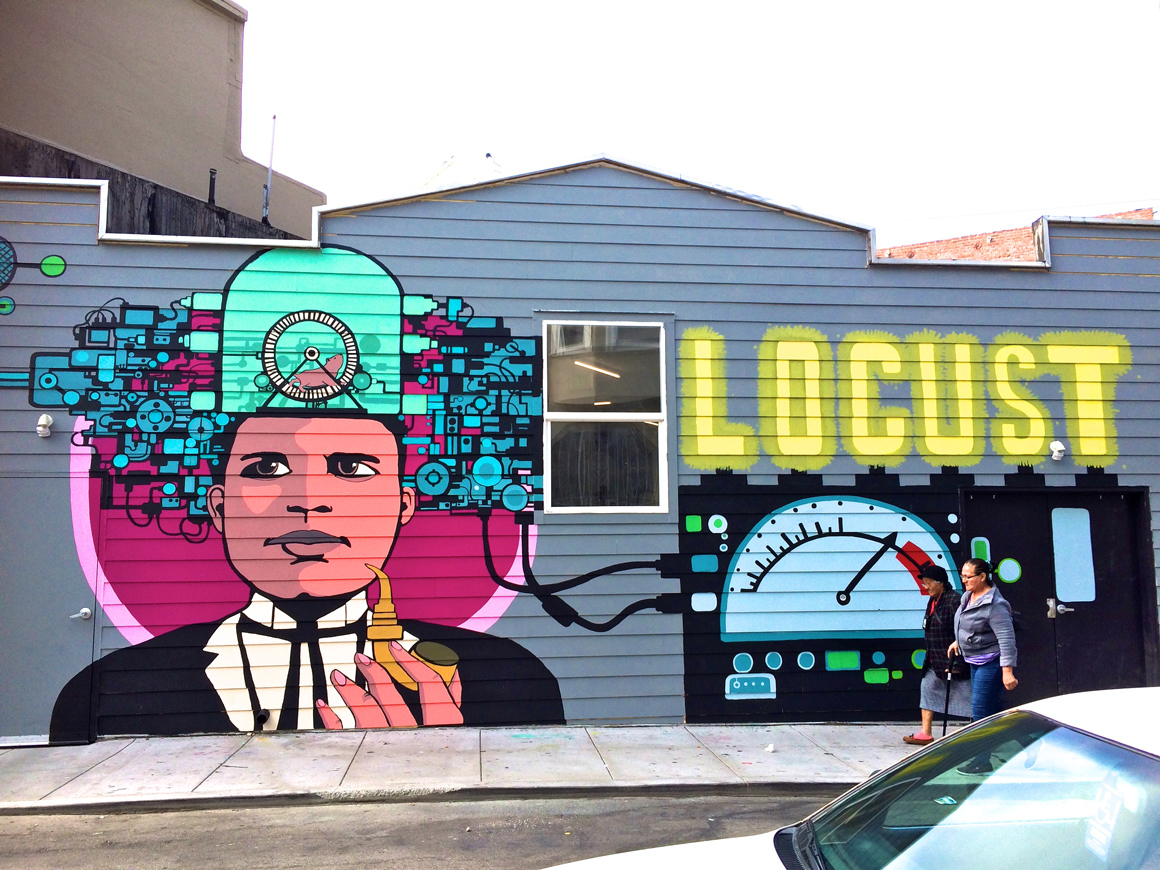 Imagine you could reach a state of mind where you could see through people and things as if they were made of glass. The circuitry and anatomy showing the viewer what we don’t normally see with our eyes.

Your tag line is ‘art, punk, science, locust songs.’ Can you expand on how punk and science define or impact your art.
I grew up on punk, so it is still a part of me, still a part of how I see the world to some extent. Although it’s a significant layer of my psyche, it doesn’t really come across in my work too much. I have a side project that is more punk inspired but it’s on the backburner for now because the paintings are taking up all my time.

Science is something I value not only as a method for arriving at truth but as an aesthetic. Cells and atoms and molecular structures are an intrinsic to my art because they are part of the invisible world and the invisible world is interesting to me. 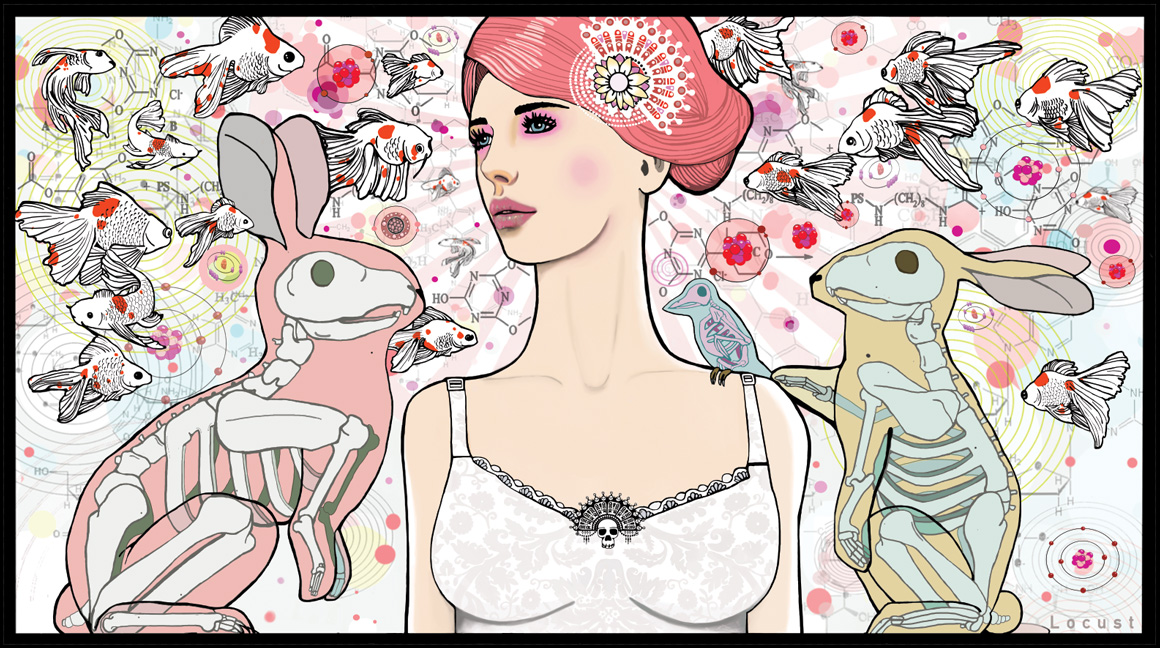 What is Locust Songs and why did you adopted it as your pseudonym?
Locustsongs is the name of the entire process. My name is Locust and the art, the paintings, those are the songs. So technically it should be called Locust’s songs, but that has too many S sounds.

Besides the circuitry you also seem curious about anatomy.
The circuitry is how I express the energy that moves through things. Sometimes it is what people’s auras look like to me, sometimes it’s an interpretation of what thinking looks like. Some people think it’s the matrix and I suppose that could be true also. That design just came naturally, I didn’t think about it too much when I started doing it. It’s what I do to relax and sometimes there is no meaning to the design other than that.
However, if I just did design work like that I would be bored, so I include it into the narrative of my work as one aspect of a larger picture.

As for the anatomical parts of the art, it is partly about the aesthetic but also about seeing through things. Imagine you could reach a state of mind where you could see through people and things as if they were made of glass. The circuitry and anatomy showing the viewer what we don’t normally see with our eyes.

What got you started creating art and was it anything like you are creating now?
We are all born with natural inclinations. Being successful at something comes by making a conscious habit out of those inclinations. Smoking weed helps too. I was 18 when I became compelled to make art in a strangely, desperately inspired kind of way. Smoking made me creatively compulsive and optimistic. I suddenly was drawing pictures every day, every chance I had. I stopped hanging out with people.

What artists have influenced you?
During my college years I actually quit painting. I wasn’t inspired to paint, the art world wasnt inspiring to me. I also wanted to make films and music; I did a lot of martial arts. I returned to painting around 2008 due to 3 main influences: street art, visionary art and some art I had seen at burning man. Even though my art may not resemble any of those movements. 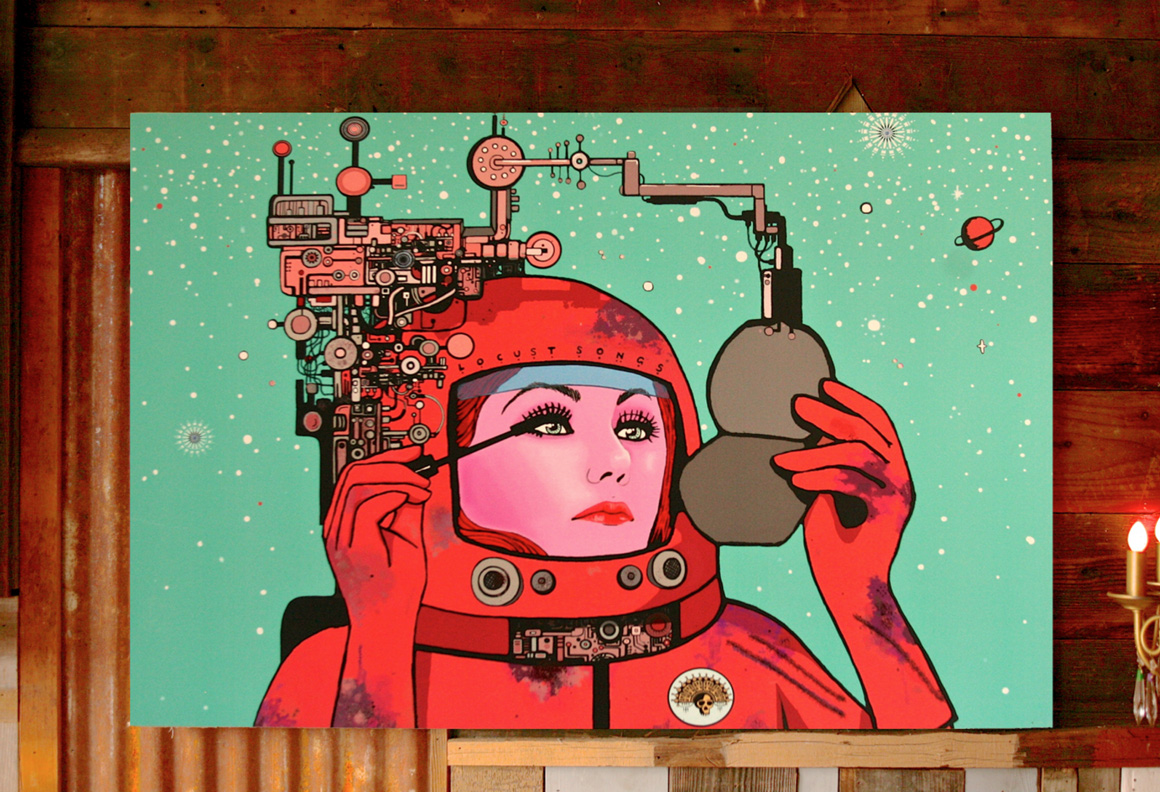 Were there any influences or incidents in your childhood that impact your art?
No. Nothing other than the fact that we’re all gonna die and I have a short time to make as much art as possible. The great thing about being an artist is that it’s something I can do forever, as opposed to another career like an athlete who has only so many years to do amazing things.

Are you from the San Francisco Bay Area or did you come here? Do you want to share what drew you here?
Ive been here for 20 years. The mid-west is a very, very strange place. I left my hometown in Michigan as soon as I could, in fact I showed up to my last day of high school in a U-Haul truck filled with my stuff. I doubt I could make the art I make if I had stayed there. If you are a weirdo artist type and you live in the mid-west, the chances of you running away to a big city is very high. Weirdos need each other. We also need the grittiness of the city life. 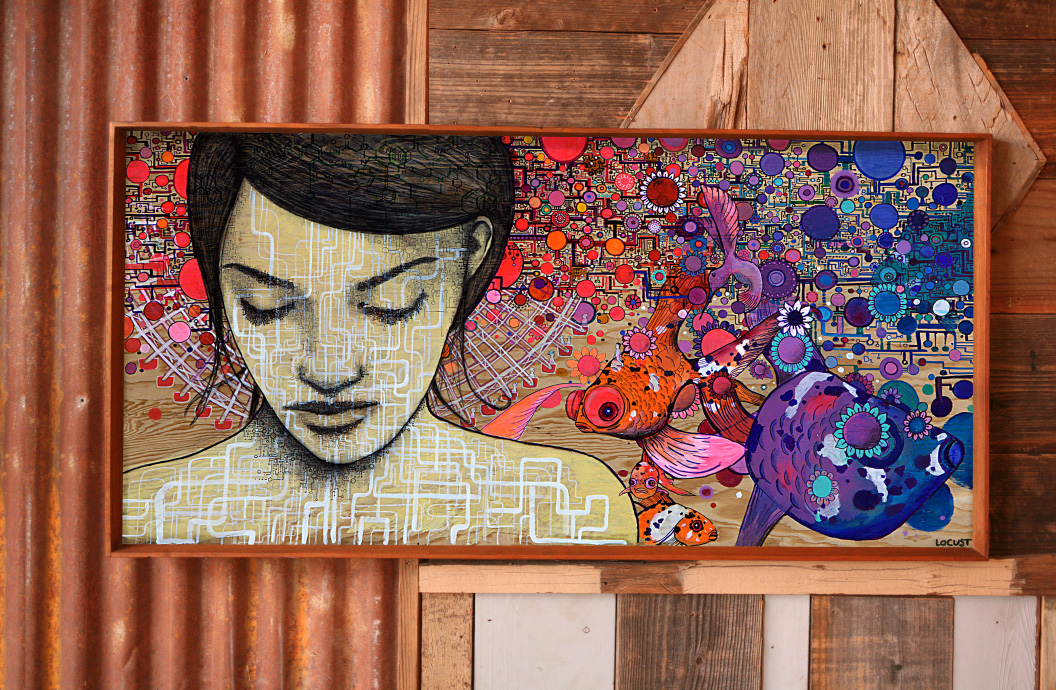 San Francisco based Lightning in a Bottle painting

What is your medium for both your artworks and street murals? Do you lean towards a certain color palette?
I use acrylics. House paint/mural paint for street art and acrylics and markers for paintings. I don’t use a specific palette although there are advantages to doing that. In fact, I think about narrowing my color palette but that might become boring to me. As I work now, I choose colors rather whimsically, I just choose whatever colors I think work well together.

San Francisco based Locust New to the Spirit painting

Are you a trained artist or self taught? Did this make any difference in the development of your style?
I’m self-taught. Ive taken some drawing classes and once I took one painting class where I did the absolute worst paintings I will ever produce. I think I could benefit from taking another painting class or drawing class, but I never get around to it. Using markers in my paintings is a weird move that has persisted over time. In the beginning I was okay with it, then when I saw really technical paintings I started to get self-conscious, but I just had to remember that it doesn’t matter. I like the effect so fuck it. 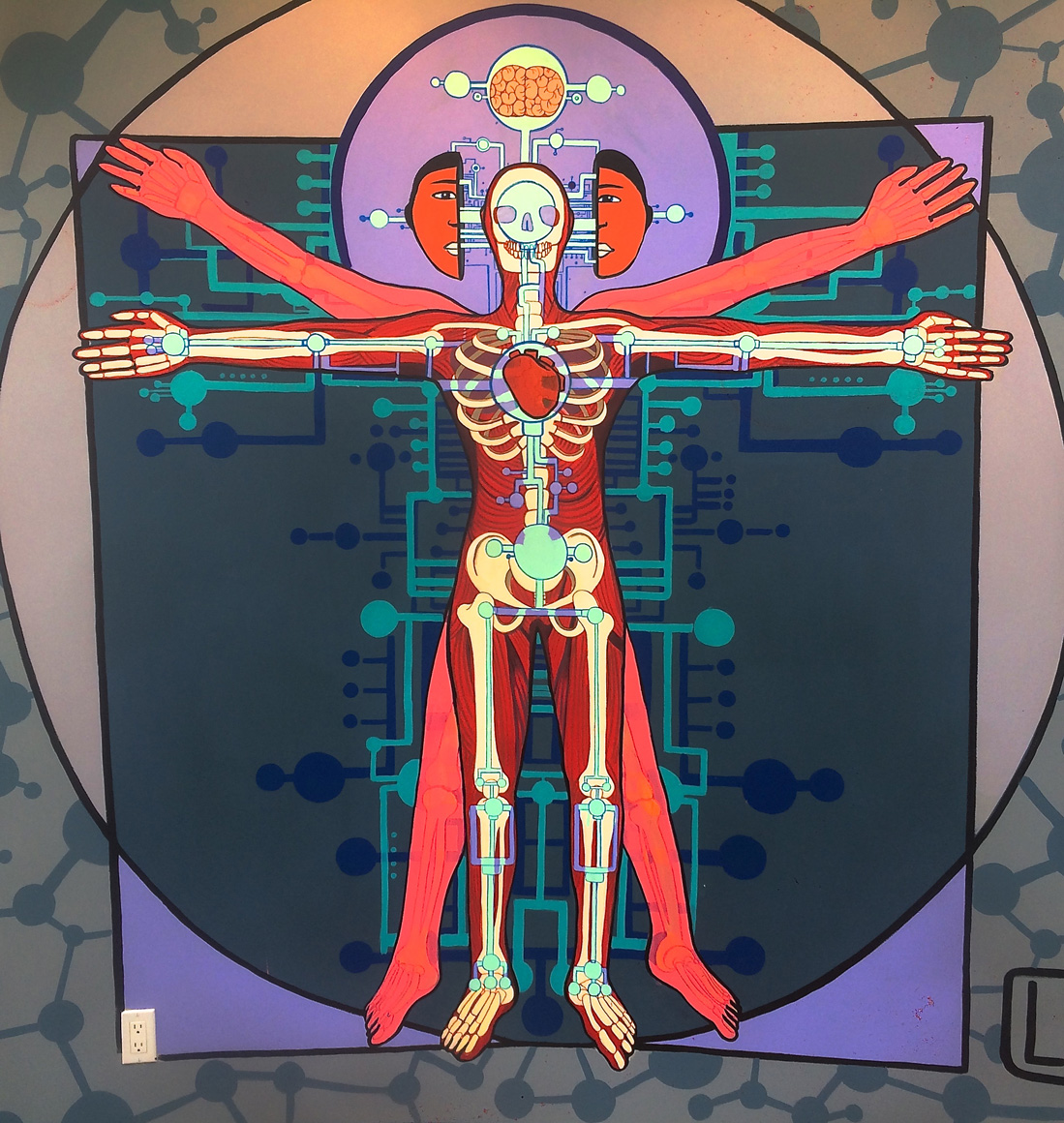 Is there any message you are trying to get across?
I didn’t plan on making art for any message other than doing it for its own sake. But over time it seems like I tend to go toward describing an experience that is other-worldly, whatever that means. As I said, I like visionary art but I am coming at it from a different angle.

How long have you been creating art on the street and what brought you there?
At an early age I learned to loathe art in galleries. It never felt right. It wasn’t my scene. I didn’t understand the demographic that liked stuff. But only because I was never affected by any art I saw in any gallery. Street art was a much needed movement. Around 2009 I got into painting on walls indoors and outdoors. The scale is important. Sometimes art should be bigger than the person. Sometimes it needs to be bigger than the frame, sometimes it should go beyond the gallery.
By the way, I don’t dislike galleries as much as I used to, but I do try to stay away from them, but only because I prefer to take 100% of the money hahahahahahaahaha.

So where can your artworks be found and purchased?


View all posts by Locust